In the Spring 2014 term, the class helped Citizens Bank & Trust concept ideas for targeting regional farmers. The PowerPoint and plans book below tell the story!

Final Portfolio
The class packaged a summary of the work they did this summer into a portfolio that was given to the client, and of coursed students use this when they interview for jobs.


Presentation to City Council
As we wrapped up the Spring 2013 semester, three students presented the semester's work at a Maryville City Council meeting on April 22.


The beginning of the semester:

It looks like we'll be continuing to work with Mozingo during the Spring term, actually implementing some of the items from the Fall term, but also working on some new items.

The news item to the left. Click to enlarge.


Coming up with a plan is one thing. Putting it into action is something else. 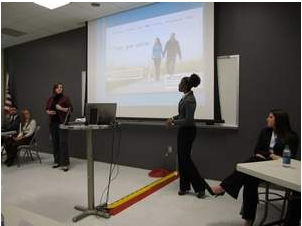 Coming up with a plan is one thing. Putting it into action is something else. But following a scheduled discussion Thursday during the final Maryville City Council meeting of the year, a group of Northwest Missouri State University students may now get a chance to do both.

This year's client was the city of Maryville, which engaged the students to come up with ways to better brand and market Mozingo Lake, a 3,000-acre recreation area and golf course east of town with a 1,000-acre reservoir that serves as the city's primary water supply. The class' campaign presentation on Dec. 5 was so well received that the city is now considering having the students implement their ideas after they return to campus next month for the start of the spring term.

In a memo to the council issued prior to its Thursday meeting, City Manager Greg McDanel said the students would essentially function as the "marketing arm" for Mozingo and work directly with city officials to organize a "re-opening" event in early April. McDanel said other potential student activities will include design and placement of lake advertising, creation of brochures and billboards, social media planning, signage improvements and merchandising.

Cost to the city for "hiring" the student marketers is estimated at $1,400, which Lamer said is needed to cover mileage, copy costs, Internet fees and other expenses. However, funding for marketing and advertising materials themselves is a separate and much pricier item. During their initial presentation to the city, the students estimated that a locally targeted advertising and rebranding effort focused on print, billboards, digital outreach and broadcast media would cost around $24,000. Their projection also predicted additional campaign-driven park revenue of $40,000 for a net profit to the city of approximately $16,000.

In addition to the re-opening celebration, student-led Mozingo branding activities to be carried out during the spring semester include a new lake brochure; billboards; a "template" system for future advertising; implementation of a consistent digital presence with regard to web directories, online maps and GPS systems; and preparation of a social media plan. Website development is not part of the class project, though the city hopes to have a new site, mozingolake.com, built and operating early in 2013 with student-created marketing content.

Selling Mozingo as a regional recreation and tourist destination has been a priority for the council for a couple of years and is a special priority of Mayor Glenn Jonagan In 2011, the city paid IDM Group $20,000 to conduct a feasibility study in connection with a proposed lodge and banquet facility at the lake, a report that described existing marketing efforts as unfocused and inconsistent. The Northwest students drew a similar conclusion, noting in their initial report that lake activities — golf, fishing, RV camping and the like — are represented by eight different logos. Other advertising and marketing efforts, they said, have comprised a hodgepodge of websites and social media containing broken links, indifferent photography and outdated information.
Posted by J. Lamer at 7:14 AM 5 comments:

This fall, my students are working on a rebranding campaign for Mozingo Lake and Mozingo Golf Course, a 3,000-acre park in northwest Missouri. The presentation will be held Wednesday, Dec. 5, from 3-5:30 at the Maryville Community Center, large conference room. It's open to the public, so stop by and see the great ideas the class will be presenting!

NWMSU's final press coverage can be seen here, and below.

The Maryville Daily Forum and KXCV have covered the class throughout the semester. 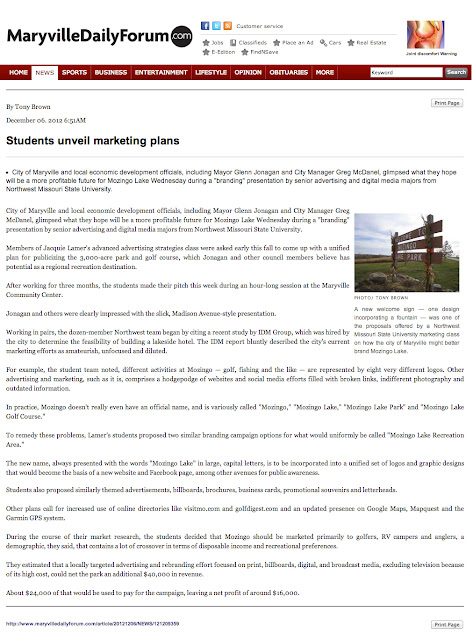 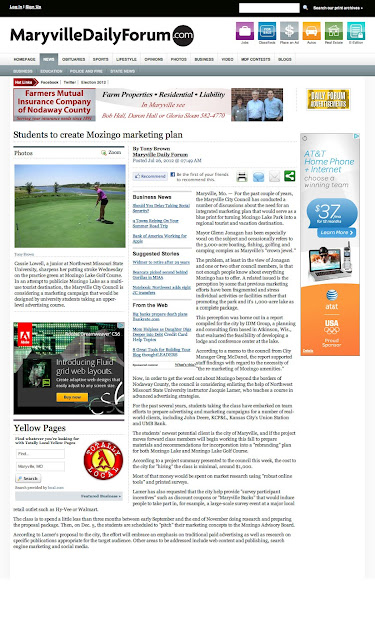 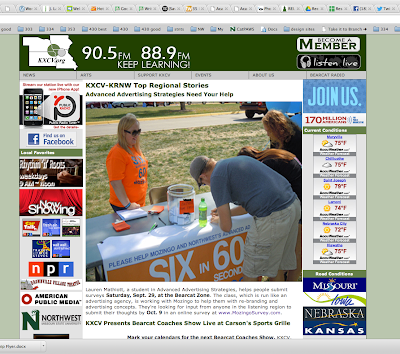 The presentation was held at UMB's headquarters in downtown Kansas City, where a panel of UMB marketing executives critiqued the student's work. The lively panel of professionals really did a nice job providing both real, hard feedback and a very pleasant and fun environment. In fact, on the spot the bank agreed to use some of the ideas presented!

Keep your eyes on UMB.com's home page... when you see the whale, you'll see one of the team's ideas. The other concept is promotion-based, so will not be so easy to track. But, any information we have will be posted here.

In the meantime, read all about the class by clicking the press release to the left, or click here.

In December, the class pitched to Union Station ideas for increasing and retaining members. Union Station executives and board members were impressed with several ideas, and we hope to see some of them realized.

See the ideas outlined in both a plansbook and pitch PowerPoint below. 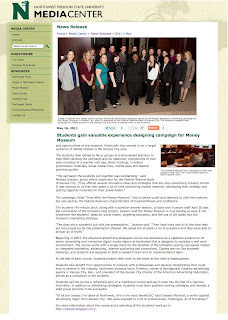 Kansas City Federal Reserve Bank Vice President Krissy Young was kind enough to work with us during the Spring semester, 2011. To say the least, this was a real challenge for the students. Not only did they have to learn about the nation's monetary system, they also had to learn about the constraints of the education system, as the target for this campaign was middle school teachers in the greater Kansas City area.

The focus of the campaign was the bank's Money Musuem, and our goal was to increase visits. The class presented a series of integrated ideas, from events to direct mail to social media and, yes, even advertising.

At this writing, it's still early, but the bank has told us that they intend to use several class ideas. I'll post updates to this as they evolve.
Plans Book Proof -- Scroll Down to see 1st Page!

See all photos from this course here.

Advanced Advertising Strategies is a "capstone" class for senior Advertising and IDM (Interactive Digital Media) majors at Northwest Missouri State University. The idea is to replicate a real work environment as much as is possible for a college course. To this end, we work with one real client the entire semester, solving real issues related to integrated marketing, advertising, internet publishing, and promotions. Classes are run like business meetings, and students are assigned to both a research team and an implementation team.

The course is taught by Jacquie Lamer, instructor in the Mass Communication department. Kevin Fullerton, owner of Springboard Creative advertising agency in Kansas City, Kan., is a consultant to the class and students. Kevin, who also serves as president of the AAF-KC, not only attends at least four of the 16 class sessions, he also helps students via telephone and email. Because of Kevin's creative experience and his genuine interest in helping students, most retain Kevin as a mentor for years after the class.

Throughout the semester, students first develop their research, and then their creative ideas. Several weeks are spent researching the client, the industry, the product and the target audience. From there, students prioritize issues, then plan, and ultimately build, solutions. By the end of the course, the students will have gone through the entire campaign process for a real client, and present their work to the client at the client's headquarters. Typically, their work consists of all aspects of marketing communication: advertising, internet marketing, social media, direct mail, promotions, search engine optimization, web usability, and essentially any relevant solution the students think will be of value to the client.

The class is intense and a strain on both a student's time and team-building abilities. But in the end, they all have a very strong portfolio piece, and some substantial interview talking points!
Posted by J. Lamer at 10:28 AM 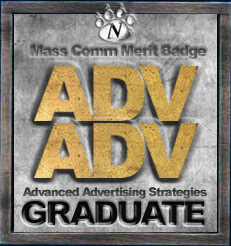 Have you completed this course? If so, you can post this badge on your site or Facebook. [HR managers: I verify this badge by "liking" it in Facebook.]